Apparently the show 24 was controversial because it showed the main character torturing information out of suspects, with apparent approval.

However, I recently realized that torture is normal behavior for TV heroes.

Specifically, when I watched Benedict Cumberbatch as Sherlock Holmes torture information out of a dying serial killer, soon after seeing Angel lock another serial killer in a magical device which prevented him moving, speaking or seeing anything, apparently forever. The latter wasn’t to get anything, but purely as punishment.

There was no bad effect in any case: no one ever had the wrong suspect, the suspect gave correct information even when they had a reason not to, and the torturers never suffer any guilt or stress.

It’s particularly noticeable in the two Joss Whedon shows, because generally speaking their assumptions are more left-wing than right-wing: for example wealthy, powerful people are likely to be the villains, and authority is likely to be arbitrary and/or hypocritical.

Torture seems to be what heroes do.

I went and saw The Avengers yesterday (my new squeeze had a free ticket). It was pretty good. I haven’t seen any of the films that led up to it, but I used to read comics (albeit more DC than Marvel), and I could follow the plot. My date didn’t read comics as a child, and would have missed that (for example) the blond guy was Captain America and had been frozen in the ice for 40 years if I hadn’t told her (I whispered – I’m not one of those people who talk in movies).

Anyway the thing I wanted to blog about was Loki. He was good, but…well, he looked like this:

I don’t know if it was Joss Whedon’s doing, but he looked like a recognisable ‘type’: the ‘weedy goth boy villain’, much like Spike from Buffy or Edward Cullen from Twilight. I found him a bit out of place, because a character like that is ‘supposed’ to have a fraught relationship with a female main character and get redeemed. In Avengers he only has an emotional connection with his brother Thor. In any case, I wouldn’t have thought that there’d be much overlap between the audience for super hero films and people who like this kind of character, and the only character who was obviously supposed to be sexy was a woman, Black Widow (otherwise it was a regular, manly story about muscular guys in leotards wrestling).

Ha ha, not really. If I thought that books could be attacked or defended without making the attacker or defender ridiculous, I still wouldn’t defend Twilight.

However, I’ve heard a few people say that vampires used to be monsters, but Twilight turned them into a kind of sexual fantasy (always with the assumption that this is bad and wrong).

You guys, I think this might be not be right.

>A while ago I read the Buffy Season 8 series of comics. They weren’t that great to be honest (the Angel ones were worse, even leaving aside that they effectively re-write the ending of the TV series). However, I found something interesting in the 5th comic in the series.

In this issue, one of the Slayers goes into a D&D-like underworld, which is filled with mutually hostile groups of monsters – fairies, slime monsters, some things that look like some kind of ogre/orc/troll type, and apparently a couple of others. 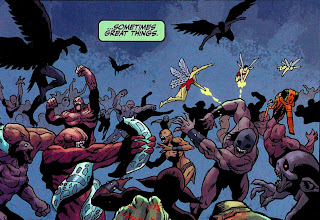 This underworld seems to literally be under the ground: she’s shown climbing down, rather than having to go through a magic portal or anything like that.

The plot is that the ogre things are planning to invade the surface world, and if they do so will destroy the other species who live closer to the surface. Thus the Slayer has to convince everyone to make an alliance against the ogres. The whole setup seems very similar to various older D&D modules.