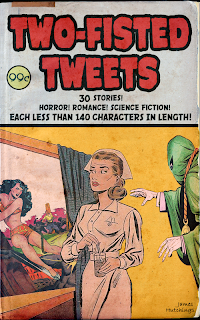 I’ve just put out an ebook, called Two-Fisted Tweets. You can get it for free here(it says 99c on the cover, but it’s free). It has 30 mostly humorous stories, including fantasy, science-fiction and horror. Each story is less than 140 characters long (the length of a Twitter tweet).

BookFetish has just done a review. They gave it four and a half stars, and say that

Not since Scott Huot and GW Brazier’s Not Proud: A Smorgasbord of Shame and Rachel Fershleiser and Larry Smith’s Not Quite What I Was Planning: Six Word Memoirs by Writers Famous and Obscure, has so few words, said so much…Though short in length, Two-Fisted Tweets is long on creative wit and humor that will have you laughing well after the final line has been read.

The full review is here.

This site uses Akismet to reduce spam. Learn how your comment data is processed.